Truce is a city in Guardia. It sits in a fertile valley on the coast of the Western Sea. It is one of the starting towns in the Cleft, along with Viorar.

c270 - Truce is one of the newer cities in the Cleft, founded around the year 270 by expatriates of various nations involved in the huge wars of the past decades. This diverse group of individuals from all over the world gathered here, establishing probably the most ethnically diverse city in the Cleft. The city was named Truce, signalling the prosperty the founding fathers hoped would set an example for the rest of the world.

301 - A small wormhole appears directly above Truce Fountain and doesn't close. From here on, adventurers occasionally fall through.

303 - A squad from the Beast Kingdom, led by Lugar and Deathjester, takes over Truce in an attempt to locate the Mana Stone of Light hidden somewhere in the region.

A council of the Mana Spirits convenes, and the spirits decide to temporarily hide the Mana Stone of Light elsewhere, away from it's original spot - the Cave of Waterfalls.

Deathjester kidnaps the Mana Spirit of Light, Lumina. He holds her hostage until the Beast Kingdome receives the Mana Stone of Light. A rag-tag group of adventurers, led by the witch Angela repells the Beast Kingdom. Lumina is set free. The Beastmen flee.

304 - Angela is named the head of Truce Council.

308 - The city of Shrike meets with Truce with plans to build a geothermal power plant inside Barrel Volcano to the south in order to provide electricity to the city.

310 - Southern Rabite Forest is cut down to pave way for a road connecting to the Monotoli building site.

Angela receives the Staff of Zephyr from Cyx, leader of the Cosmic Guardians, shortly after the death of Zebu on Joel Island. She vows to keep it protected from the hands of evil.

316 - The Staff of Zephyr is stolen from Angela.

317 - Angela steps down from her position as Truce Council's leader and leaves Truce with Hawk to head north, disappearing from the pages of history.

319 - A Ministory involving the Runestones of Shadmire, Guardia, Fa'Diel, and Goa. The events are hazy, but led to the death of a wizard named Helena in the final battle atop Barrel Volcano, the destruction of the Runestones, the revelation of the identity of the Jumi assassin (Sandra), and the revelation that Princess Zelda has been missing from Hyrule for a year and Hyrule Castle has covered up this disaster. Oh, and Cyx gets shot. He lives and has a fling with Selan.

321 - A mysterious Sorceress shows up from the Haunted Wastelands in the Gigan Canyons, wielding the Staff of Zephyr. This sparks rumors that Sorceress Vulpecula has returned. With a new legion of Gerudo warriors following her, and a legion of Chobin-Slaves, the goal was to take over Truce. Adventurers from Truce step in to combat her (with assistance via a Chobin revolt) and she eventually loses control of the staff and vanishes.

The conflicts of this region led to the destruction of the Shrine of the Cosmic Guardians and most of it's members. The leader Cyx survives but abandons the region shortly after, disappearing from the pages of history.

325 - Booster Tower is constructed just outside of the western city limits of Truce. It is a vacuum of electrical energy supplied by ShinRa.

327 - Booster signs the Bundt Contract with Truce Council, allowing Booster Tower operations to continue as long as they did not interfere with the public.

345 - Bowser and Kamek of the Koopa Kingdom pay a visit to Truce, announcing the hunt for Princess Toadstool, whom they believe is hiding somewhere in the area. A woman named Selrin decides to impersonate the princess (she always wanted to be one) and the Koopas take her to their airship to prepare a wedding. He soon finds out that the girl is an imposter and these events lead up to war.

346 - In the aftermath of the war, Morton Koopa Jr. was captured and imprisoned. The Koopa Kingdom stands down from all it's non-mobile military bases (except Walla Walla). Truce Council votes to form Truce Militia, whose initial members consist of many of the people who bravely fought against the koopas. Truce Militia fills the gap the Cosmic Guardians once held as protectors of the region.

349 - The Empire attempts to take over Truce but is repelled by the Militia with aid from Guardia Castle. Truce Militia stations soldiers around Mongrelia in Sulfataska.

Deneb lends her aid to The Empire. Hundreds of War Witches ride on winged horses down to Brei, avoiding Truce on their way from Brigantes. Truce Militia detaches half of its force there, where they are victorious. However, half of the Witches were in McNeil Woods, and attacked and crushed the fort near Mongrelia.

Both sides sustained such heavy casualties that Deneb called a cease-fire. Enraged, Bahamut revealed himself as the leader of The Empire and attacked Deneb for being 'so weak.' Because this directly contradicted Deneb's contract with him, she used the magic contract to instantly reduce Bahamut to magicite. Deneb was last seen negotiating the terms of a peace contract with the Council of Guardia.

350 - The Truce Militia is absorbed by and becomes an auxiliary service of the Guardia army.

Truce has also been the target of more than one invading evil army in its past, no doubt attributed to the pleasant and fertile Guardia Fields located to the south along the road through the Sulfataska Mountains into Fa'Diel.

Truce has a few points of interest for tourists and residents.

The Truce Fountain is an informal gathering place, set in the heart of eastern Truce. The actual fountain provides fresh water, and (hopefully!) features multiple, redundant filtering and cleaning systems. It also serves as a staging ground, and adventurers of all types can be found there at varying hours.

Some people like to meet at the nearby Pub, instead.

The Truce Fountain is the default recall point for all players. The Magical, Flying Tuna can change a player's recall point to Viorar instead, however.

Leene's Bell is a large metal bell near the western gate of Truce, constructed as a monument to Truce's history and traditions.

It has an inscription which reads:

Truce is home to several merchants of varying capacity. Most cater to the novice adventurer, but the Tent of Wonders offers a wider variety of merchandise.

Cobblestone roads run throughout Truce itself, and walking is the preferred method of travel within the city.

A ferry operates out of Truce, providing service to Alfador Isle, Shrike, Wutai, and the Battle Arena, all off of the eastern coast of Guardia, with warp pipe service to Viorar and the Expellian Island.

The cities of Cosmo Canyon and Wutai lie to the north, on the other side of the Truce Canyon. Similarly, Rocket Town and Booster Tower can be found not far from the western gate of Truce. To the south are the fields of Guardia and the small town of Crysta.

Truce has an incredibly diverse population. No standout race can be mentioned here.

While part of the kingdom of Guardia, Truce receives little support -- financial or otherwise -- from its government, and operates de facto as a semi-independent city-state. A high volume of trade exists between Truce and the nearby cities of Rocket Town and Wutai.

Truce is governed by a representative democracy. A city council oversees the function of Truce, where all council members are voted in place with 10 year tenures. Still, the city council rarely changes chairs, as most individuals in these positions are quite popular.

The city of Truce has a formalized Militia, formed in response to an invasion by the Koopa Troops. They have also had some clashes with agents of The Empire. 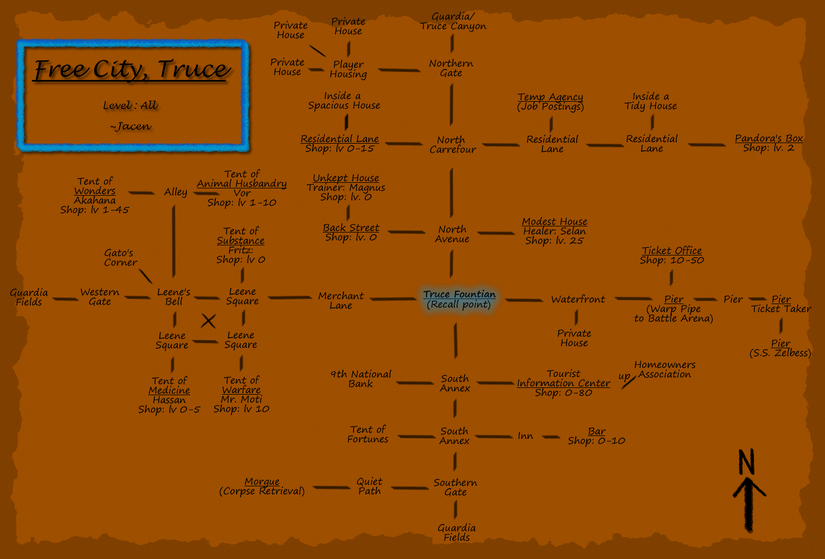 Retrieved from "https://cleftd.fandom.com/wiki/Truce?oldid=5315"
Community content is available under CC-BY-SA unless otherwise noted.