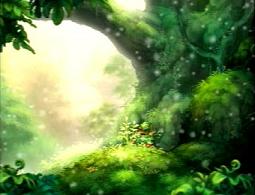 The Holyland is a place in the Upper Realm which contains the Mana Tree, the Mana Goddess's servants and guardians (fairies), and other Mana creatures. The Mana Holyland existed as another pocket dimension, similar to the Cleft.

Retrieved from "https://cleftd.fandom.com/wiki/Mana_Holyland?oldid=4640"
Community content is available under CC-BY-SA unless otherwise noted.