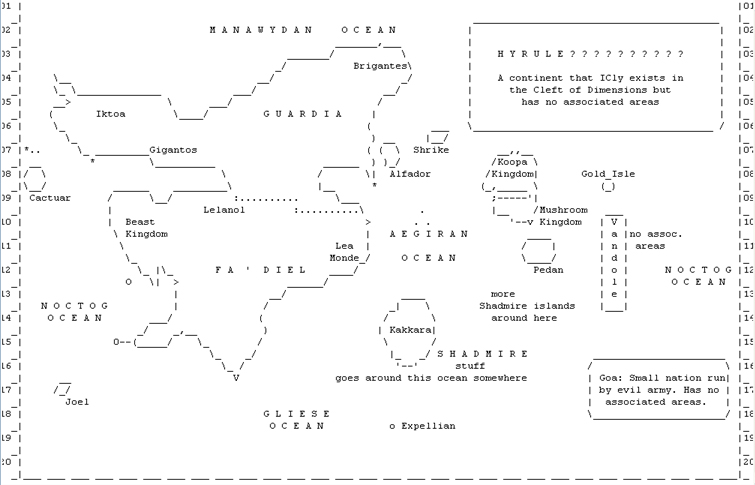 On the northwest side of the world is the continent of Guardia, probably the most mountainous continent in the Cleft. It features the largest and tallest mountain range (Loftarasa) as well as a few other minor groups of mountains. Most of the population exists within flatlands and valleys between these peaks.

The continent is almost entirely ruled by Guardia, hence the name. Guardia is run by a coalition of elected individuals from the major towns whom meet in Guardia Castle to administer law to the states. It used to be a Kingdom, hence the castle, but the King and Queen are now figureheads. The leader of Guardia goes by the title of Chancellor.

To the southwest is the continent of Fa'Diel, the area most untouched by civilization and therefore the greenest. Its terrain is varied, though most of it is close to sea level.

The continent has no clear ruling entity, and is maintained mostly by isolated communities and an alliance of soldiers whose duties are primarily to aid the locals. Fa'Diel is divided into provinces defined by their geologic properties and common populations.

Shadmire was one of the first places in the Cleft with any intelligent life.

It contains the Sea of Wonders, which used to be the Mana Holyland.

Population centers of note in Shadmire:

Landmarks or Monuments in Shadmire:

Population centers of note in Hyrule:

Landmarks or Monuments in Hyrule:

Population centers of note in Vandole:

Landmarks or Monuments in Vandole:

Population centers of note in Goa:

Landmarks or Monuments in Goa:

This is the smallest ocean, existing to the far north of the Cleft. The waters here are extremely cold and full of icebergs. It borders the northern coast of Guardia (mainly the Madra Ice Fields and Loftarasa Mountain Range), and the north coast of Hyrule and the Haunted Wastelands.

There are an extremely small amount of intelligent creatures that live off of the Manawydan Ocean. A few small settlements exist on the northern beaches consisting mainly of Walrus, Lobstermen, and Penguins, but nothing to write home about.

Because of its isolation and dangerous waters, the sea life here thrives more than in other regions of the Cleft. The fish can grow to very large, trecherous sizes.

These warm waters exist between the east coast of Guardia, the west coast of Hyrule, and the north waters of the Shadmire Archipelago. Because of the large amount of port cities around these continents, the Aegiran Ocean contains the highest volume of boat traffic. The center of the Aegiran Ocean is marked by the El Nido Triangle.

The aquatic life around the Aegiran Ocean consists of many tropical fish of medium size. Very rarely are there any large threatening fish in these waters, and if they are, they mainly exist around the El Nido region. Rarely a Gyarados has been spotted in these waters.

Also known as the dead waters, the Gliese Ocean is a very still and dead section of the Cleft that exists at the southern edge of the Cleft. Little light reaches these waters and the only land nearby is the southern tip of Fa'Diel, a few small islands from Shadmire, and the south coast of Goa.

No one lives here. (obviously this means someone secret special probably lives here)

Little to no aquatic life in these waters.

These warm waters exist between the west coast of Fa'Diel and the east coasts of Hyrule, Vandole, and Goa. This is the largest ocean in the Cleft of Dimensions. The water here is also the deepest and the darkest, giving the ocean it's name.

While many fish exist in the Aegiran Ocean, they are often further below the surface to avoid the constant contact with the ferries and trade ships. The primary spot for fishing in the Cleft exists in the Noctog Ocean, which is vaster and provides more security for the ocean life.

Several methods of transportation exist in the Cleft of Dimensions, including a ferry system and an airship.

Retrieved from "https://cleftd.fandom.com/wiki/Geography?oldid=5043"
Community content is available under CC-BY-SA unless otherwise noted.