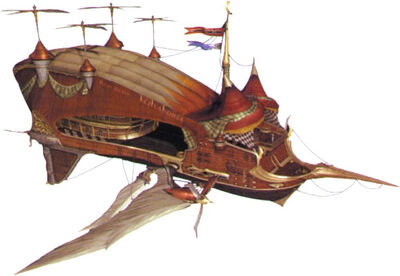 The Red Rose is an airship owned by Captain Beatrix.

Ticket fairies stationed near the concierges sell the tickets for the airship for 1000 silver each.

Red Rose Concierges are scattered all over the world, and when talked to will tell you the airship's current location. To board the airship when it is in the local dock, simply give the ticket to the concierge and you will be boarded.

The airship is constantly moving around the world as fast as it can. It can take varying amounts of time to move between stops, but generally not more than 35 or less than 15 pulses between stops.

You will automatically disembark at each stop along the route and must hand over another ticket to continue traveling.

Plight of the Red RoseEdit

Beneath a sweltering sun, a massive airship slowly chugged along, hanging heavy in the air. The engines, obviously damaged, strenuously kept the battleship aloft but it was still flying suspiciously low to the ground.

Brooding darkly, the swordswoman at the helm flipped her hair over her shoulder. "Where ARE we...?" She spoke carefully, as grit and sand swirled around her.

Nearby, a female soldier saluted her. "We've... no idea, ma'am. The navigational equipment is completely powerless."

"BAH!" The Captain turned to face the remaining two members of her crew and regained her composure. "The rest of the crew...?"

This time, the second soldier answered with a salute. "Swept overboard by the shockwave..." Though her eyes were hidden by the Alexandrian helmet, her voice clearly held a note of despair.

Overlooking the soldier's emotion and pressing on, the swordswoman enquired "Were the ship's offensive capabilities impaired?"

"Yes ma'am. The main guns are jammed, and the desert sands are getting inside the harpoon shafts..."

Cursing to herself, the Captain once more ran her fingers through her hair and flipped it over her shoulder.

"Captain Beatrix, what are we going to do?? Separated from everyone, stranded in this horribly dry place... sand is getting in places I didn't know it could..."

"Stop sniveling." Beatrix stood up straighter, addressing the disheartened soldiers in front of her. "A soldier of Alexandria has a strong and honorable heart, and never gives up fighting...
Just because we are without knowledge, without defenses, and without assistance does not mean we should lose hope."

She stooped on the deck, surveying the remaining supplies. "If you have no honor and no courage, you may jump ship now. If you wish to stand behind me and live, you can get the food belowdecks so we might have some unspoiled resources to survive on."

Both soldiers gave a sharp salute, skimpy armor clanking and sweat running down their exposed skin. Completely hopeless for survival, but terrified of their eerily calm commander, they set to work saving the precious foodstuffs.

Beatrix left the spot she had been surveying the desert from, slowly making her way to the stern of the ship. She gazed over the railing, mesmerized by the swirling sands over which the ship was passing.

"It is not the food I'm worried about. They all think we've died." In a sudden and uncharacteristic burst of anger, she kicked a bucket off the ship and into the distance. "Me, dead?! Who could believe such incompetence?!"

Retrieved from "https://cleftd.fandom.com/wiki/Airship?oldid=4204"
Community content is available under CC-BY-SA unless otherwise noted.